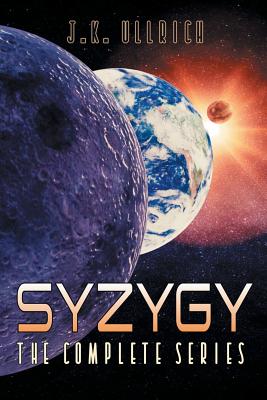 By J. K. Ullrich
Email or call for price
Backordered

Shackleton Crater was never supposed to be home. The lunar mining station sheltered survivors for a century after a genetic engineering disaster wiped out Earth's population, but now the domes are crumbling, and humanity's best hope is to terraform Mars with species that teenaged "divers" collect from their ruined homeworld. Ash became the best diver in a generation by taking risks: exploring dangerous sites; staying too long on the toxic surface; and striking a bargain with Skye, an interloper from the dark-side rebels who promises him the location of a hidden archive with everything needed for a new planet. But their discovery reveals secrets that threaten to shatter their fragile communities. As old lies and new truths emerge, only Ash and Skye's fractious partnership can save their species...or finally drive it to extinction.

Syzygy: The Complete Series unites all six installments of the original novella hexalogy in a single epic volume: