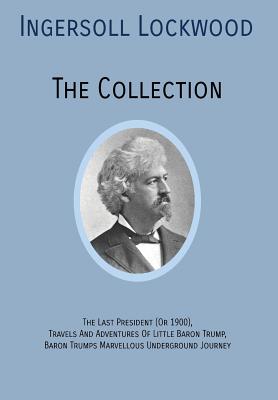 Complete and unabridged with all original illustrations.

The Collected Works of Ingersoll Lockwood: The Baron Trump Novels & 1900; Or, The Last President, have seen a resurgence in interest since Donald Trump's election to President of the United States in 2016. All of these titles were written before the turn of the 20th Century, but both contain eerie similarities with modern day political events. For the first time, all the works are presented in a single volume so readers can decipher for themselves whether Lockwood's words were a telling of things to come, or just a curious coincidence of American literature.

In the 1890s, Ingersoll Lockwood authored a series of children's books about the escapades of his character, the young Baron Trump: Travels and Adventures of Little Baron Trump and his Wonderful Dog Bulger, and Baron Trump's Marvellous Underground Journey. The series followed a literary trend of the time, which had child protagonists adventuring to enchanted lands and encountering fantastic beings. Lewis Carroll's Alice in Wonderland, and L. Frank Baum's The Wonderful Wizard of Oz are two famous examples of this genre.

Lockwood's Baron is an aristocratic youth bored with his life of luxury in Castle Trump. Searching for adventure, Baron travels to Russia to discover an underground world beneath his feet. He journeys downward and finds himself lost in peculiar settings surrounded by the strange inhabitants of this new world. The stories follow his adventures and eventual struggle to find his way back to the surface he left behind.

The Baron Trump novels were obscured by the more successful children's books of the time. Lockwood's tall tales seemed destined for the literary dust bin, but the election of Donald Trump in 2016 renewed interest in these works due to the President's youngest son's name: Barron Trump. Now, back in print, the Baron Trump series is enjoying considerable interest and success.

In 1900; Or, The Last President, Ingersoll Lockwood paints the picture of a politically charged New York City, where a political outsider has overcome stiff opposition to be elected President of the United States. Mob rule threatens, and marching protests rove up and down Fifth Avenue. The scene is an uncanny reflection of what happened as Donald Trump spent his days as President Elect holed up in Trump Tower on Fifth Avenue as he awaited his inauguration.