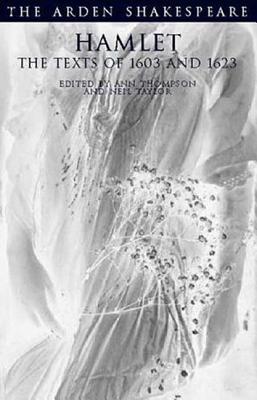 This is book number 7 in the Arden Shakespeare Third series.

This volume gives readers the First Quarto text of 1603 and the Folio Text of 1623, modernised and edited to the usual Arden standard. As a companion to the Second Quarto volume, it will be of particular interest to scholars and students of textual history, or to anyone studying Hamlet at an advanced level. Both plays are edited and annotated and the introduction contains the fullest available stage history of the First Quarto text.

Ann Thompson is Professor of English Language and Literature and Head of the School of Humanities at King's College London. She has edited The Taming of the Shrew, and her other publications include Shakespeare's Chaucer, Shakespeare, Meaning and Metaphor (with John O. Thompson), and Women Reading Shakespeare, 1660-1900 (with Sasha Roberts). She has also published widely on editing Shakespeare and Shakespeare's language. She is one of the General Editors of the Arden Shakespeare. Neil Taylor is Dean of Research and Dean of the Graduate School at Roehampton University. He has edited Henry IV, Part 2 and (with Brian Loughrey) Thomas Middleton: Five Plays. He has also published widely on editing Shakespeare, Shakespeare on film, and other aspects of Renaissance and modern drama.

"The Arden3 Hamlet is fascinating, and every Shakespeare scholar will want to possess it. The editors' approach is attuned to the relativism, pluralism, and skepticism of our time, and it is defended with remarkable thoroughness and intelligence....Thompson and Taylor's introductory material is in line with their treatment of the text...they are concerned to introduce the reader to the multitude of diverse critical approaches and to the variety within the developing theatrical tradition. They do this very well, and their discussion of Hamlet on stage and screen and of its offshoots in drama and fiction fills a notable gap...The full and consistently interesting commentary is also enlivened by snippets of information about performances...Thompson and Taylor have made an innovative and stimulating contribution to the Arden3 series."—Shakespeare Quarterly  "Hamlet...has been given a rebirth of sorts by editors Ann Thompson and Neil Taylor...puts the final pieces of the "puzzle of Hamlet" into place by publishing...updated versions of both the First Quarto and First Folio editions of the play. This wonderful ternion gives the serious students of Hamlet everything they need to delve deeply into the Dane. The textual annotations are extensive and worth the price of the book alone. None of the material is duplicated from the Hamlet: Arden Third Series, so this is all new commentary from two of the brightest minds in the world of Shakespeare... Delivers the quality you've come to expect from Arden."—PlayShakespeare.com