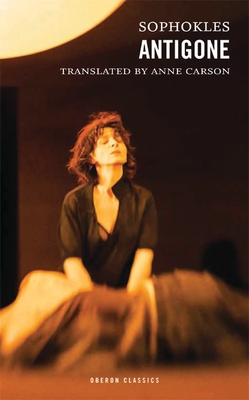 When her dead brother is decreed a traitor, his body left unburied beyond the city walls, Antigone refuses to accept this most severe of punishments. Defying her uncle who governs, she dares to say 'No'. Forging ahead with a funeral alone, she places personal allegiance before politics, a tenacious act that will trigger a cycle of destruction.

Renowned for the revelatory nature of his work, Ivo van Hove first enthralled London audiences with his ground-breaking Roman Tragediesseen at the Barbican in 2009. Drawing on his 'ability to break open texts calcified by tradition' (Guardian), the director now turns to a classic Greek masterpiece.

Anne Carson is a MacArthur Fellow; she has received the Lannan Prize, the T.S Eliot Prize, the Pushcart Prize, the Griffin Poetry Prize (twice-awarded), and was an Anna-Maria Kellen Fellow at the American Academy in Berlin, Germany. Anne is currently adapting The Bakkhai for the Almeida. Classic Stage Company in New York has produced Anne Carson's An Oresteia (a trilogy adapted from Aeschylus' Agamemnon, Sophokles' Electra and Euripides' Orestes) in repertory.

‘Mademoiselle Binoche may be the big draw, but there’s more to it than that. Director Ivo van Hove goes for a modern-dress approach which, along with Anne Carson’s informal new translation, gives it a sprightly tone. Not rushed, though. The thing is played to the rhythm of a doleful, tolling bell and there are few moments when voices are raised or when anyone moves at a fast pace. Fate flows at the steady pace of lava.’ Daily Mail

‘You hear Anne Carson’s wonderful new translation – supple, salty and vivid… And by making you aware of the act of listening, it becomes, in part, about the responsibilities of democracy… the play seems to offer a challenge: what would you do?’ Financial Times