The Stone of Destiny (Hardcover) 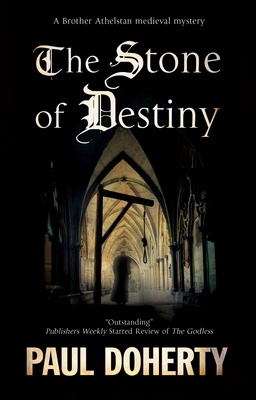 A series of grisly deaths are linked to the sacred Stone of Scone in this compelling medieval mystery featuring friar-sleuth Brother Athelstan. This abbey is a strange place, Brother Athelstan. A hall of ghosts, a place of flitting shadows. The dead throng here. I can hear them whispering as they ride the air. During the harsh winter of 1381 murder stalks the streets of London in all its grisly forms. The city's prostitutes are falling prey to a silent, deadly assassin known as The Flayer who carefully peels his victims' skins for his collection. At the same time, Westminster Abbey, which houses the sacred Stone of Scone, is plagued by a series of hideous poisonings. Could there be a connection between these brutally violent deaths and the stone, which the English crown cherishes as a symbol of its rule over Scotland? Then there are the two former Upright Men, leaders of the Great Revolt, who are found mysteriously hanged in the Piebald Tavern, close to Brother Athelstan's parish church of St Erconwald - and Athelstan is faced with his most baffling investigation to date. Can he navigate this deadly maze of murder and intrigue and pull the various threads together?

Paul Doherty studied History at Liverpool and Oxford Universities, and is now a head teacher in Essex. He is the author of more than eighty historical mysteries including the Brother Athelstan, Hugh Corbett and Margaret Beaufort medieval mystery series.