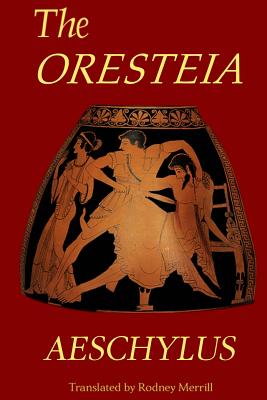 The Oresteia of Aeschylus is the greatest monument of the ancient Greek theater, and one of the greatest classics of Western literature. It is the only surviving trilogy of the many performed in the Theater of Dionysos of Athens at a spring religious festival, the City Dionysia, and its subject is a mythical enactment of the transition from retributive justice to fully civil means of dealing with wrongdoing, a central concern of societies everywhere. Partly in retrospective narrative and partly in action, it treats the course of the intrafamilial curse on the house of Atreus, princes of Argos, that destroys the family and upsets the social order, to its resolution in a newly constituted court in Athens, the Areopagos. In this context, the gods important to the Athenians appear or are invoked. But despite the serious matter, it was an entertaining theatrical experience, as extravagant as any surviving Greek play, with spectacular entrances-Agamemnon on a chariot, the Erinyes sleeping on the stage, Athena flying with her cape-like aegis; dances, solo lyrics, choruses, and impassioned musical exchanges among chorus and characters; and at the end a procession of citizens. Nor is humor absent: Orestes' nurse voices a funny yet incisive account of the equivocal feelings-affection and impatience-roused by infant care, and the gods' clumsy and finally irrelevant arguments in Orestes' trial must have raised a smile in ancient spectators and can do so today. For all these features of the performance the aural experience was of the essence. The actors declaimed the dialogue so as to project it through their stylized masks and reach the farthest spectators in the large open-air theater. The chorus and the characters chanted or sang the choral odes and lyrics to the accompaniment of an aulos, a wind instrument like a double oboe. Though the melodies, which were probably never written down, do not survive, we have the rhythms embodied in the wide-ranging meters of the verse. Aeschylus constructed these with great care for their musical expressiveness, and he may well have composed the monodic melodies that embodied them in the lyric passages. This translation seeks to convey this pervasive music; the dialogue is mainly in formal iambic hexameter verse, representing Greek iambic trimeters, two syllables longer than the iambic pentameter verse prevalent in English poetry. The lyrics are set in meters representing those of the original; they range from simple and regular to highly complex. This version is dedicated especially to those who would like to realize this musical experience in viva voce performances, reciting the dialogue, chanting some of the choruses, even, perhaps, improvising tunes for some choral and lyric passages. To encourage this, all the lyric passages are marked to indicate accented syllables and phrasing. The typeface throughout is large enough to make the book suitable for use as a script on such occasions, perhaps among groups of friends. Yet the translation also seeks to transmit the meaning of the original as closely as possible and to preserve tragic decorum in its diction.The aim throughout is to allow the modern audience of readers and hearers to imagine and participate in one of the most entertaining and stimulating dramatic experiences of all time. To that end the book includes a brief Foreword, a longer Afterword suggesting some interpretive approaches and describing the most prominent meters, a selected bibliography, and a list of names for quick reference to elucidate mythical, geographical, and historical allusions. On the covers are lively pictures from ancient Greek vases-one of them from Aeschylus' lifetime, the other almost a century later-illustrating some features of the trilogy.

The playwright, Aeschylus, is the first of the western world whose work is extant; his genius put a stamp on the drama that has never been superseded, though only seven of his more than 70 plays survive. Nor has their excellence been surpassed; for dramatic tension and brilliant lyricism they set the bar high. Born around 525 BCE in Eleusis, near Athens, to a wealthy family, he probably began writing tragedy at about the age of twenty-five. He fought at the Battle of Marathon in 490, where the Athenians defeated the invading Persians, and at Salamis and perhaps Plataea, in 479. His last work, The Oresteia, the only surviving tragic trilogy, won the first prize at the City Dionysia in 458. He died in Sicily two years later. The translator, Rodney Merrill, encountered Longfellow's verse narratives as a teenager and learned to savor the music of formal verse. Soon after, he discovered translations of Homeric epic and The Oresteia. He studied the history and literature of England at Harvard and acquired a Ph.D. in English and Comparative Literature at Stanford, where he began the study of ancient Greek and, during a sojourn in Paris, started reading the Iliad in Greek. At Harvard, in a thesis on the lyrics of Sir Thomas Wyatt, he pursued his interest in the musical roots of older poetry, which he continued in a Stanford dissertation on the song forms shaping late medieval love lyrics. Part of the latter appeared in a 1973 monograph, "Chaucer's Broche of Thebes." For seven years as Assistant Professor at the University of California, Berkeley, he taught English literature, especially great poetry from Chaucer through Spenser, Shakespeare, and Milton, increasing his sense of how English syntax can convey complex thought in musical meters. After that stint of employment, during a year in Lisbon, Portugal, living in a Volkswagen bus in a campground, he began translating the Odyssey. That translation and one of the Iliad, published in 2002 and 2007 respectively, aim to convey the music of those oral-formulaic epic songs in English dactylic hexameter verse, as does his translation of the Argonautika of Apollonios Rhodios, 2012. The conviction inspiring the present translation is similar: the musical rhythms surviving in the elaborate meters of the plays can be conveyed in an English rendering. Yet to be published are comparable versions of the Aeneid of Virgil and the poems of Theocritus.