People You Love to Know About: Of people, famous and forgotten (Paperback) 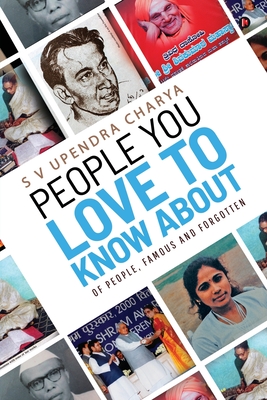 Gandhians, writers, artists, linguists, artisans, teachers, philosophers, sports personalities, religious people and rationalists--this compilation book has profile features of all such distinguished personalities, both famous and less known. People You Love to Know About is a collection of sixty news stories written by S V Upendra Charya. These profile features, mostly written in the early 1990s and in the year 2000, were regularly featured in the weekly supplements of Deccan Herald, The Indian Express and other popular news dailies. Many of the articles were also published periodically in Kannada and English magazines. War Star: "In times of peace, soldiers are rarely remembered, S V UPENDRA CHAYA profiles Capt. Mallikarjunan, a war veteran."-Deccan Herald, January 27, 2000 Remembering A na Kru: "It is to A N Krishna Rao that the credit of inculcating the reading habit among Kannadigas should go.

S V Upendra Charya talks about the writer and his works." - Deccan Herald, November 4, 2008 Tiny Treasure: by S V Upendra Charya - "Akkikal Nanjappa is a noted name when it comes to micro art. This incredible man has to his credit 4160 letters written on a single grain of rice also 1100 landscapes and 130 nudes painted on a 5x8 inch paper " - The Indian Express, July 13, 1992 Marathon mission: "Strange as it may seem, a Gandhian has been walking all his life for the country with missionary zeal, writes Upendra Charya. He is Swami Kuttiji, a sexagenarian well known as Vinobaji of South India." - The Times of India, April 3, 1989