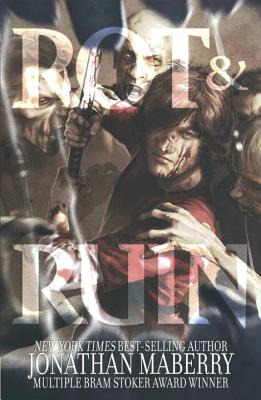 Brand-new adventures set in the world of Rot & Ruin! Written by New York Times best-selling author and multiple Bram Stoker award-winner, Jonathan Maberry, this all-new storyline continues events from the award-winning series of novels. We meet Benny, Nix, Lilah, and Chong as they travel through the Sierra Nevada mountains just one faltering step ahead of zombie hordes and one giant leap behind the plane flying through the sky that set them on their journey of discovery.

JONATHAN MABERRY is a New York Times best-selling and multiple Bram Stoker Award-winning suspense author, editor, comic book writer, magazine feature writer, playwright, content creator, and writing teacher/lecturer. He was named one of Today’s Top Ten Horror Writers. His books have been sold to more than two-dozen countries.
Among his numerous book and comic credits are the shared world anthologies V-Wars: Shockwaves and V-Wars: Night Terrors; the X-Files short story anthologies The Truth Is Out There, Trust No One, and Secret Agendas; the V-Wars comic series; and the comic series adaptation of his zombie novel Rot & Ruin; all from IDW Publishing.

"This is the series that turned my reluctant readers into avid readers." - Frank Spinney, Lead Teacher for Stillwater Academy in Maine

"ROT & RUIN: WARRIOR SMART is a gripping read that will keep students on the edge of their seats and wanting more! I can't wait to these into the hands of my students!" --Sister Kimberly Miller, Teacher/Librarian at Little Flower Catholic High School for Girls in Philadelphia

"The stories Maberry give us in the ROT & RUIN: WARRIOR SMART are riveting, with a dark side untouched by other writers of the same ilk. How will the human race survive? What do they need to do? These are all questions Maberry asks of Benny, Nix, Chong and Lilah as they make their way across the deserted landscape of the West Coast. One of the best things about Jonathan Maberry is that his zombie world is not predictable. Yes, we have zombies, and yes, we have humans, clinging to life ever so desperately. But we have heroes in the shape of a 15 year old teenager who grew up in the shade of First Night, tested and tried on the battlefield called the living. The illustrations by Tony Vargas are more than just dramatic, they pull you into a world where you know you don't want to be but can't help staying. Maberry manages to bring humor into a world brimming with wall-to-wall violence, where there is little hope and no justice. Unpredictable and humorous, Maberry manages to connect the reader with the story in his ever-direct and creative manner." -Ann Cole, Teacher, Pennsbury School District, Fairless Hills, PA

"I am a teacher and literacy coordinator at an Elementary School. It has long been my practice to include print of all types into classroom libraries: books, comics, how-to manuals, etc. You never know what will hook a student into reading more. However, I did not encourage the inclusion of 'horror' which seemed inappropriate for their age level. The thing about the ROT & RUIN series of novels and the ROT & RUIN: WARRIOR SMART comic is...they are not horrific. They are a great example of major themes of literature: man against man, man against nature. What the kids and I have found is that they turn good and evil on its head. You would like to assume the zombies are evil and the humans are good, but that isn't a fair assumption. The very best and worst of humanity can be seen throughout the stories in unpredictable ways. Plus, students need good examples of youth who are pensive, surviving, befriending, struggling, succeeding. They have those examples in abundance in the Rot and Ruin books. Several students have agreed with me that they aren't really zombie stories...they are human stories...and that is why we feel such an emotional attachment to the characters and the episodes the experience. This series is transitional...and wins over more and more people as word of mouth gets out. I have had more parents ask to borrow the 4 books than have ever requested any other titles in my 23 years of teaching." --Sheila Owen, Teacher and Literacy Coordinator; Palm Elementary, Beaumont, California