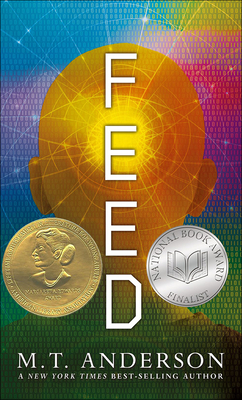 Identity crises, consumerism, and star-crossed teenage love in a futuristic society where people connect to the Internet via feeds implanted in their brains.
For Titus and his friends, it started out like any ordinary trip to the moon - a chance to party during spring break and play with some stupid low-grav at the Ricochet Lounge. But that was before the crazy hacker caused all their feeds to malfunction, sending them to the hospital to lie around with nothing inside their heads for days. And it was before Titus met Violet, a beautiful, brainy teenage girl who has decided to fight the feed and its omnipresent ability to categorize human thoughts and desires. Following in the footsteps of George Orwell, Anthony Burgess, and Kurt Vonnegut Jr., M. T. Anderson has created a not-so-brave new world -- and a smart, savage satire that has captivated readers with its view of an imagined future that veers unnervingly close to the here and now.

M. T. Anderson is on the faculty of Vermont College's MFA Program in Writing for Children. He is the author of the novels THIRSTY and BURGER WUSS and the picture-book biography HANDEL, WHO KNEW WHAT HE LIKED. He says of FEED, "To write this novel, I read a huge number of magazines like SEVENTEEN, MAXIM, and STUFF. I eavesdropped on conversations in malls, especially when people were shouting into cell phones. Where else could you get lines like, 'Dude, I think the truffle is totally undervalued'?"