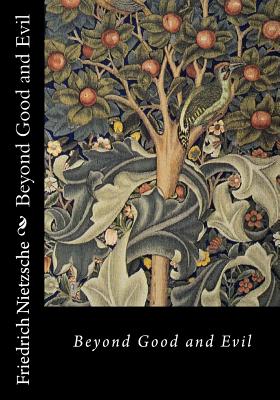 Beyond Good and Evil: Prelude to a Philosophy of the Future is a book by philosopher Friedrich Nietzsche that expands the ideas of his previous work, Thus Spoke Zarathustra, with a more critical and polemical approach. It was first published in 1886.In Beyond Good and Evil, Nietzsche accuses past philosophers of lacking critical sense and blindly accepting dogmatic premises in their consideration of morality. Specifically, he accuses them of founding grand metaphysical systems upon the faith that the good man is the opposite of the evil man, rather than just a different expression of the same basic impulses that find more direct expression in the evil man. The work moves into the realm "beyond good and evil" in the sense of leaving behind the traditional morality which Nietzsche subjects to a destructive critique in favour of what he regards as an affirmative approach that fearlessly confronts the perspectival nature of knowledge and the perilous condition of the modern individual.Of the four "late-period" writings of Nietzsche, Beyond Good and Evil most closely resembles the aphoristic style of his middle period. In it he exposes the deficiencies of those usually called "philosophers" and identifies the qualities of the "new philosophers": imagination, self-assertion, danger, originality, and the "creation of values." He then contests some of the key presuppositions of the old philosophic tradition like "self-consciousness," "knowledge," "truth," and "free will," explaining them as inventions of the moral consciousness. In their place, he offers the "will to power" as an explanation of all behavior; this ties into his "perspective of life," which he regards as "beyond good and evil," denying a universal morality for all human beings. Religion and the master and slave moralities feature prominently as Nietzsche re-evaluates deeply held humanistic beliefs, portraying even domination, appropriation and injury to the weak as not universally objectionable.Friedrich Wilhelm Nietzsche (15 October 1844 - 25 August 1900) was a German philosopher, cultural critic, poet, philologist, and Latin and Greek scholar whose work has exerted a profound influence on Western philosophy and modern intellectual history. He began his career as a classical philologist before turning to philosophy. He became the youngest ever to hold the Chair of Classical Philology at the University of Basel in 1869, at the age of 24. Nietzsche resigned in 1879 due to health problems that plagued him most of his life, and he completed much of his core writing in the following decade. In 1889, at age 44, he suffered a collapse and a complete loss of his mental faculties. He lived his remaining years in the care of his mother (until her death in 1897), and then with his sister Elisabeth F rster-Nietzsche, and died in 1900.Nietzsche's body of work touched widely on art, philology, history, religion, tragedy, culture, and science, and drew early inspiration from figures such as Schopenhauer, Wagner, and Goethe. His writing spans philosophical polemics, poetry, cultural criticism, and fiction while displaying a fondness for aphorism and irony. Some prominent elements of his philosophy include his radical critique of truth in favor of perspectivism; his genealogical critique of religion and Christian morality, and his related theory of master-slave morality; his aesthetic affirmation of existence in response to the "death of God" and the profound crisis of nihilism; his notion of the Apollonian and Dionysian; and his characterization of the human subject as the expression of competing wills, collectively understood as the will to power. In his later work, he developed influential concepts such as the bermensch and the doctrine of eternal return, and became increasingly preoccupied with the creative powers of the individual to overcome social, cultural, and moral contexts in pursuit of new values and aesthetic health.