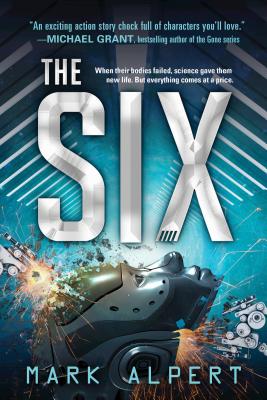 This is book number 1 in the Six series.

Exchanging their bodies for machines, these teens will defy expectations, brave danger, and defend civilization. They are The Six.

Adam's muscular dystrophy has stolen his mobility, his friends, and in less than a year it will take his life. Virtual reality games are Adam's only escape from his wheelchair. In his alternate world, he can defeat anyone. Running, jumping, scoring touchdowns: Adam is always the hero.

Then an artificial intelligence program hacks into Adam's game. Created by Adam's computer-genius father, Sigma has gone rogue, threatening to kill Adam--and the entire human race. Their one chance to stop Sigma is using the technology Adam's dad developed to digitally preserve the mind of his dying son.

Along with a select group of other terminally ill teens, Adam becomes one of the Six who have forfeited their failing bodies to inhabit weaponized robots. But with time running short, the Six must learn to manipulate their new mechanical forms and work together to train for epic combat...before Sigma destroys humanity.

"Adam is an unusual hero--and he faces a frightening question: Computers can't kill-CAN they? I'm still shaken by the answer. Will the near-future really be this terrifying?"-R.L. Stine, bestselling author of the Fear Street series.