We Are the Ants (Paperback) 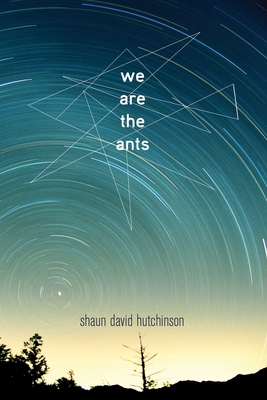 From the “author to watch” (Kirkus Reviews) of The Five Stages of Andrew Brawley comes an “equal parts sarcastic and profound” (Kirkus Reviews, starred review) novel about a teenage boy who must decide whether or not the world is worth saving.

Henry Denton has spent years being periodically abducted by aliens. Then the aliens give him an ultimatum: The world will end in 144 days, and all Henry has to do to stop it is push a big red button.

Only he isn’t sure he wants to.

After all, life hasn’t been great for Henry. His mom is a struggling waitress held together by a thin layer of cigarette smoke. His brother is a jobless dropout who just knocked someone up. His grandmother is slowly losing herself to Alzheimer’s. And Henry is still dealing with the grief of his boyfriend’s suicide last year.

Wiping the slate clean sounds like a pretty good choice to him.

But Henry is a scientist first, and facing the question thoroughly and logically, he begins to look for pros and cons: in the bully who is his perpetual one-night stand, in the best friend who betrayed him, in the brilliant and mysterious boy who walked into the wrong class. Weighing the pain and the joy that surrounds him, Henry is left with the ultimate choice: push the button and save the planet and everyone on it…or let the world—and his pain—be destroyed forever.

Shaun David Hutchinson is the author of numerous books for young adults, including The Past and Other Things That Should Stay Buried, The Apocalypse of Elena Mendoza, At the Edge of the Universe, and We Are the Ants. He also edited the anthologies Violent Ends and Feral Youth and wrote the memoir Brave Face, which chronicles his struggles with depression and coming out during his teenage years. He lives in Seattle, where he enjoys drinking coffee, yelling at the TV, and eating cake. Visit him at ShaunDavidHutchinson.com or on Twitter @ShaunieDarko.

“A beautiful, masterfully told story by someone who is at the top of his craft.” –Lambda Literary

“Unfailingly dramatic and crackling with characters who become real upon the page.” –Booklist, starred review

“Bitterly funny, with a ray of hope amid bleakness.” –Kirkus Reviews, starred review

“Hutchinson has crafted an unflinching portrait of the pain and confusion of young love and loss.” –Publishers Weekly, starred review