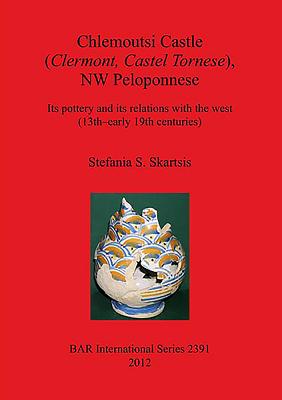 Chlemoutsi castle is located in the NW Peloponnese (Greece). It was built by the Franks following the Fourth Crusade and the establishment of the Principality of Achaea. At the beginning of the 15th century the castle passed to Charles I Tocco, Count Palatine of Cephalonia and Despot of Epirus. In 1428 it passed to the Palaiologoi and in 1460 it fell to the Ottomans. Following the fate of the Peloponnese, the castle remained in the hands of the Ottomans until the early 19th century, except for approximately three decades in the late 17th and the early 18th century when Venice replaced the Ottomans as overlords of the Peloponnese. The subject of this book is the pottery from Chlemoutsi and its discussion and interpretation. The pottery comes from several small-scale excavations conducted by the Greek Archaeological Service in the 1980s and '90s. The ceramic material under study here covers a long time span and offers important evidence for the pottery used in Greece between the 13th and the 19th centuries. It also provides information on the history of Chlemoutsi, which has been proved particularly important for the periods following the Ottoman conquest (1460), since the history and the role of the castle after the end of its Frankish occupation is hardly known in the bibliography. What characterizes the pottery of Chlemoutsi is the continuous and significant presence of Italian wares, and thus a large section of this present research deals with Italian pottery imports - still a relatively little-explored topic in Greek ceramic studies today.