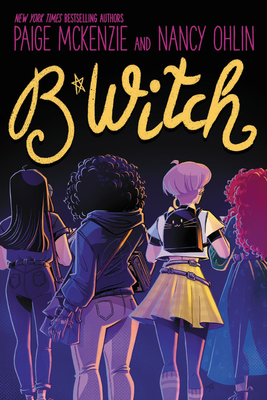 This is book number 1 in the B*WITCH series.

When the new girl in school joins a group of teen witches, she and her friends must team up with a rival coven to take down a mysterious killer.
New girl and secret witch Iris just wants to get through her first day of school without a panic attack. The last thing she expects is to be taken in by a coven of three witches: soft-spoken Greta, thoughtful and musical Ridley, and fiery and spirited Binx. They may be the first witches Iris has met IRL, but their coven is not alone in their small northwestern town.
The Triad is the other coven at their school. When the Triad's not using spells to punish their exes or break up happy couples for fun, they practice dark magic. The two covens have a rivalry stretching all the way back to junior high.
When tragedy strikes and one of their own is murdered, the rival covens must band together to find out who is responsible before it's too late. Someone's anti-witch ideology has turned deadly . . . and one of them is next.
With an inclusive cast of teen witches who leap off the page with style, attitude, and charm, B*Witch is a bingeable read perfect for fans of Buffy the Vampire Slayer and Mean Girls alike.

Paige McKenzie is a millennial hyphenate: a New York Times bestselling author, YouTuber, actor, influencer, creator, artist, and producer. Her first book series, The Haunting of Sunshine Girl, was on the New York Times bestseller list for over a month. Paige is constantly creating. Her Etsy shop the Homebody Guild is full of her art and designs, and she is always updating it with new creations. Paige also interacts daily with her Sunshiners across a variety of media including YouTube (where she has over half a million subscribers), Facebook, Twitter, and Instagram. Paige is a founding member of Coat Tale Productions, with three projects in active development. Paige lives in Portland, Oregon with the love of her life, a seven-pound Chihuahua named Pongo.
Nancy Ohlin was born in Tokyo and moved to the United States when she was nine. She has written, ghostwritten, or collaborated on over one hundred fiction and nonfiction books for children, teens, and adults, including her YA novels Consent, Beauty, and Always, Forever (Simon & Schuster). Most recently, she collaborated with Paige on The Sacrifice of Sunshine Girl (Hachette Books), Quvenzhané Wallis on the Shai and Emmie chapter book series (Simon & Schuster), and Chloe Lukasiak on her forthcoming memoir Girl on Pointe: Chloe's Guide to Taking on the World (Bloomsbury). Learn more at nancyohlin.com and on Twitter (@nancyohlin).