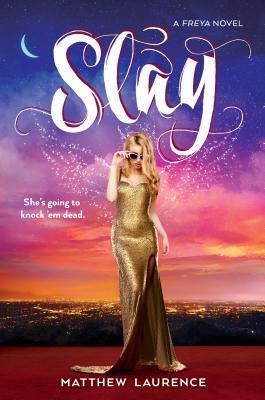 This is book number 2 in the Freya series.

In this second book of Matthew Laurence's YA Freya series, Freya goes to Hollywood for more fame and power so she can take down her ancient enemy, the god Ares.

Her fight for freedom is over,
but the fight for power is just beginning.

After Freya escapes from the power-controlling Finemdi Corporation, her quest to defeat her new enemy takes her to Hollywood. The ancient Norse goddess of love, beauty, war, and death disguises herself once again as Sara Vanadi, now an up-and-coming star on a scandalous television series. Freya knows that today’s modern gods live on the screen, and Los Angeles offers her both fame and believers.

And she desperately needs strength from her believers.With sinister forces at her heels, an ancient enemy returned, and an unknown threat lurking in the shadows, Freya must walk a dangerous line between mortal and goddess. Because if she loses her humanity, who will save the world?

Blending fantasy and science fiction in a contemporary Hollywood setting, Slay: A Freya Novel is the second book in Matthew Laurence’s action-packed series about an ancient goddess in a modern world.

A writer and game designer for over eight years, Matthew Laurence is dedicated to creating great entertainment. His career has taken him from Orlando and San Francisco all the way to Helsinki, Finland as part of Rovio, the makers of Angry Birds. Besides playing games of all kinds, Matthew writes and cooks for fun, travels with his wife whenever (and wherever) possible, and maintains an unhealthy relationship with Netflix. He is the author of Freya.

"Move over, Percy Jackson,there’s a new girl in town." —Booklist

"Boatloads of action, villains who are at once familiar and original in their quests for world domination, and a savvy team of multireligious goddesses make for a kick-ass adventure situated between science and belief." —The Bulletin of the Center for Children'sBooks (BCCB)