A War Like No Other: How the Athenians and Spartans Fought the Peloponnesian War (Paperback) 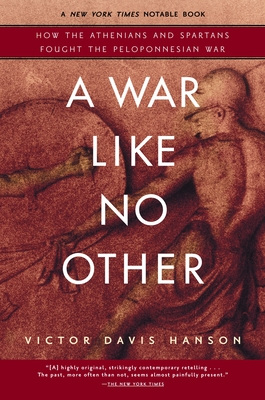 One of our most provocative military historians, Victor Davis Hanson has given us painstakingly researched and pathbreaking accounts of wars ranging from classical antiquity to the twenty-first century. Now he juxtaposes an ancient conflict with our most urgent modern concerns to create his most engrossing work to date, A War Like No Other.

Over the course of a generation, the Hellenic city-states of Athens and Sparta fought a bloody conflict that resulted in the collapse of Athens and the end of its golden age. Thucydides wrote the standard history of the Peloponnesian War, which has given readers throughout the ages a vivid and authoritative narrative. But Hanson offers readers something new: a complete chronological account that reflects the political background of the time, the strategic thinking of the combatants, the misery of battle in multifaceted theaters, and important insight into how these events echo in the present.

Hanson compellingly portrays the ways Athens and Sparta fought on land and sea, in city and countryside, and details their employment of the full scope of conventional and nonconventional tactics, from sieges to targeted assassinations, torture, and terrorism. He also assesses the crucial roles played by warriors such as Pericles and Lysander, artists, among them Aristophanes, and thinkers including Sophocles and Plato.

Hanson’s perceptive analysis of events and personalities raises many thought-provoking questions: Were Athens and Sparta like America and Russia, two superpowers battling to the death? Is the Peloponnesian War echoed in the endless, frustrating conflicts of Vietnam, Northern Ireland, and the current Middle East? Or was it more like America’s own Civil War, a brutal rift that rent the fabric of a glorious society, or even this century’s “red state—blue state” schism between liberals and conservatives, a cultural war that manifestly controls military policies? Hanson daringly brings the facts to life and unearths the often surprising ways in which the past informs the present.

Brilliantly researched, dynamically written, A War Like No Other is like no other history of this important war.

Victor Davis Hanson has written or edited numerous books, including The Western Way of War, The Wars of the Ancient Greeks, The Soul of Battle, Carnage and Culture, and Ripples of Battle. He is also the author of two bestselling collections of essays: An Autumn of War and Between War and Peace. He is director emeritus of the classics program at California State University, Fresno, and currently a classicist and military historian at the Hoover Institution, Stanford University. He has been a National Endowment for the Humanities fellow, a fellow at the Center for Advanced Study in Behavioral Sciences at Stanford, an Onassis fellow in Greece, Shifrin Professor at the U.S. Naval Academy, Annapolis, and a recipient of the Eric Brendel Memorial Award for journalism. He lives and works with his wife and three children on their forty-acre tree and vine farm near Selma, California, where he was born in 1953.

“The age of Pericles was also a time of famine, pestilence and atrocity: a ‘Thirty Year Slaughter.’ In order to understand the lesson this offers for civilization, one must try to feel it as the Greeks felt it, and reflect it as they did. In this dual task, Victor Davis Hanson once again demonstrates that his qualifications are unrivalled.”
–Christopher Hitchens, author of Love, Poverty, and War: Journeys and Essays

“This book will immediately become the standard companion volume in English to Thucydides’ Peloponnesian Wars. Its own battle narratives are unexcelled; but its singular merit is its comprehensive and detailed description of how the actual fighting was done, how generals led, and why each side–Sparta and Athens–went to war. The author is a man of action and a practicing farmer as well as the premier classical historian and military commentator of our day.”
–Josiah Bunting III, author of Ulysses S. Grant

“The Peloponnesian War was grand and tragic but the sheer misery of those who experienced it has often been overlooked–until now. From death by trampling to cannibalism, from preteen-sized knights on ponies to deformed and ghostly plague survivors, from elegant galleys to bloodbaths in waterlogged death traps, the dark cones of classical combat are all brought to light by Hanson. This is a groundbreaking book by a great historian.”
–Barry Strauss, author of The Battle of Salamis: The Naval Encounter That Saved Greece–and Western Civilization