Thinking the US South: Contemporary Philosophy from Southern Perspectives (Paperback) 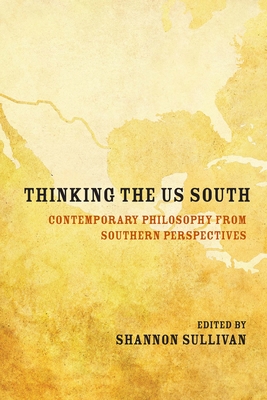 Knowledge emerges from contexts, which are shaped by people’s experiences. The varied essays in Thinking the US South: Contemporary Philosophy from Southern Perspectives demonstrate that Southern identities, borders, and practices play an important but unacknowledged role in ethical, political, emotional, and global issues connected to knowledge production. Not merely one geographical region among others, the US South is sometimes a fantasy and other times a nightmare, but it is always a prominent component of the American national imaginary. In connection with the Global North and Global South, the US South provides a valuable perspective from which to explore race, class, gender, and other inter- and intra-American differences. The result is a fresh look at how identity is constituted; the role of place, ancestors, and belonging in identity formation; the impact of regional differences on what counts as political resistance; the ways that affect and emotional labor circulate; practices of boundary policing, deportation, and mourning; issues of disability and slowness; racial and other forms of suffering; and above all, the question of whether and how doing philosophy changes when done from Southern standpoints. Examining racist tropes, Indigenous land claims, Black Southern philosophical perspectives, migrant labor, and more, this incisive anthology makes clear that roots matter.

SHANNON SULLIVAN is a professor of philosophy and health psychology at the University of North Carolina at Charlotte. She is the author of Living Across and Through Skins: Transactional Bodies, Pragmatism, and Feminism; Revealing Whiteness: The Unconscious Habits of Racial Privilege; Good White People: The Problem with Middle-Class White Anti-Racism; The Physiology of Sexist and Racist Oppression; and White Privilege.

“The ‘South’ is the quintessential metonym for everything US citizens want to disavow: racism, classism, white supremacy, illiteracy, caste, segregation, anything and everything that is thought uncouth, uncivilized, uneducated, sounding dumb and peasant-like. The ‘South’ has become the alibi but also exculpation for enduring racism, some sort of telluric and atavistic leftover from some remote past. Yet, while the ‘South’ points to a geographical region, it is most importantly the topology that maps the US imaginary. This anthology, like the one Sullivan coedited with Nancy Tuana nearly two decades ago, launches yet another disciplinary paradigm shift, a geographical relocation, that will transform not just what philosophy is done and how it is done but also what kinds of themes, questions, and figures philosophy in the US will have to take up henceforth. Sullivan has done it again. Here is a book that will be indispensable and inevitable as we aim to ‘achieve our country’ in James Baldwin’s inspirational words.” —Eduardo Mendieta, coeditor of Decolonizing Ethics: The Critical Theory of Enrique Dussel

“The essays in Thinking the US South span a wide gamut of issues and concerns, many of which, I am sure, will be quite unfamiliar to those philosophers socialized by the standard canon. As such, this book has the great virtue of contributing to the growing body of work demonstrating that while mainstream philosophers claim the status of universality for their writings and framings of what are supposed to be the important philosophical questions, they are actually only drawing on a severely restricted sub-section of the human experience. Overall, this is a very valuable and interesting collection, well worth adding to your library.” —Charles Mills, author of Black Rights/White Wrongs: The Critique of Racial Liberalism

“However much philosophy claims the universal standpoint, it is rooted in complex social identities with rich haunted histories. Few of these identities are as obscure as the Southern. This volume of essays opens a new field of discourse in academic philosophy by exploring classic and emerging themes from Dixieland to the Global South, including: hubristic insult and violations of etiquette, mournful nostalgia and joyful remembrances of ‘grandmother metaphysics,’ mythic attachments to land and messy narratives of purity, global economies of sympathy, and roadside memorials of loss migrants. The essays tell stories of Black rural traditions in urban Southern culture and re-positionings of double consciousness, of plantation logics and the truth-telling of Spirituals and Black Ancestral discourses; they reevaluate the Blues Man along with white trash, and what it means to be perceived to be slow. This book is indeed a milestone for philosophy in, of, and regarding the South.” —Cynthia Willett, coauthor of Uproarious: How Feminists and Other Subversive Comics Speak Truth

“This is a groundbreaking book. Being a southern philosopher myself, I found it to be an illuminating, refreshing, candid, and honest account of philosophy in and of the south.” —Noëlle McAfee, author of Fear of Breakdown: Politics and Psychoanalysis

"Thanks to Thinking the US South, I will never think about the US South in the same way again." —Amy R. Martin, Southern Review of Books