Half a Creature from the Sea: A Life in Stories (Hardcover) 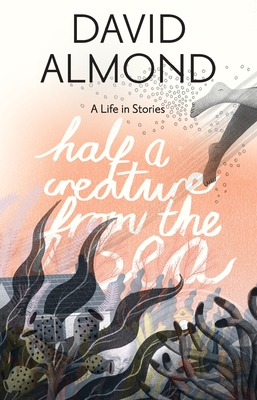 Master storyteller David Almond presents a beautiful collection of short fiction, interwoven with pieces that illuminate the inspiration behind the stories.

May Malone is said to have a monster in her house, but what Norman finds there may just be the angel he needs. Joe Quinn’s house is noisy with poltergeists, or could it be Davie’s raging causing the disturbance? Fragile Annie learns the truth about herself in a photograph taken by a traveling man near the sea. Set in the northern English Tyneside country of the author’s childhood, these eight short stories by the incomparable David Almond evoke gritty realities and ineffable longings, experiences both ordinary and magical. In autobiographical preludes to each story, the writer shows how all things can be turned into tales, reflecting on a time of wonder, tenderness, and joy.

David Almond has received several major awards, including a Hans Christian Andersen Award, a Carnegie Medal, two Whitbread Awards, an Eleanor Farjeon Award, and a Michael L. Printz Award. He is known worldwide as the author of Skellig, Clay, and many other plays, stories, and novels, including The Boy Who Swam with Piranhas, illustrated by Oliver Jeffers; The Savage, Slog’s Dad, and Mouse Bird Snake Wolf, all illustrated by Dave McKean; and My Dad’s a Birdman and The Boy Who Climbed Into the Moon, both illustrated by Polly Dunbar. David Almond lives in England.

Eleanor Taylor is an award-winning illustrator. She lives in England.

The tale-behind-the-tale preludes are intriguing—perhaps especially to big fans and those interested in the writing process—but the stories themselves shine brightest here. Taylor's illustrations, sometimes cartoonish, sometimes more abstract and moody, cast the Almondine experience in yet another new light. This is powerful, top-notch storytelling from Almond, who seems himself to be the titular "half a creature from the sea," in that he, as ever, fluidly blends past and future, the living and the dead, the ordinary and the transcendent.
—Kirkus Reviews (starred review)

Beyond offering eight alluring epiphany stories (most previously published elsewhere), Almond (The Tightrope Walkers) provides a rare glimpse into the writer’s imagination and the process of creation. The sights, sounds, smells, and emotions evoked in these stories will long resonate with readers and act as reminders of the joys, tragedies, and magic of childhood.
—Publishers Weekly (starred review)

While the fictional stories are equally invested in the marriage between the mystical and the earthy, Almond also brings a luminous quality to the biographical bits that will encourage readers to rethink the wonder of their own lives and to see what’s just outside their windows with new eyes.
—Bulletin of the Center for Children's Books

Dark and haunting, Almond’s narratives evoke feelings of longing, suspense and horror, as well as a bit of hope and wonder. This title would be a welcome addition to middle and high school short story collections.
—School Library Connection