The War That Killed Achilles: The True Story of Homer's Iliad and the Trojan War (Hardcover) 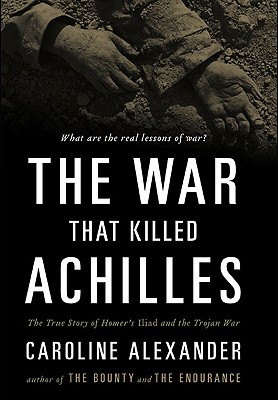 By Caroline Alexander
$26.95
Email or call for price.

A groundbreaking reading of the Iliad that restores Homer's vision of the tragedy of war, by the bestselling author of The Bounty.

Few warriors, in life or literature, have challenged their commanding officer and the rationale of the war they fought as fiercely as did Homer's hero Achilles. Today, the Iliad is celebrated as one of the greatest works in literature, the epic of all epics; many have forgotten that the subject of this ancient poem was war-not merely the poetical romance of the war at Troy, but war, in all its enduring devastation.

Using the legend of the Trojan war, the Iliad addresses the central questions defining the war experience of every age: Is a warrior ever justified in standing up against his commander? Must he sacrifice his life for someone else's cause? Giving his life for his country, does a man betray his family? How is a catastrophic war ever allowed to start-and why, if all parties wish it over, can it not be ended?

As she did with The Endurance and The Bounty, Caroline Alexander lets us see why a familiar story has had such an impact on us for centuries, revealing what Homer really meant. Written with the authority of a scholar and the vigor of a bestselling narrative historian, The War That Killed Achilles is a superb and utterly timely presentation of one of the timeless stories of our civilization.

Caroline Alexander has written for The New Yorker, Granta, Conde Nast Traveler, Smithsonian, Outside, and National Geographic and is the author of four previous books."

"In her spectacular and constantly surprising new book, Caroline Alexander has taken the 'original' war book and turned it upside down, making it, as all wars are, an excruciating story of loss...The War that Killed Achilles is a triumph."
-Ken Burns

"This riveting tale of ancient wars, legendary warriors, and mythical gods is at once a great adventure story and a cautionary tale of the enduring perils of hubris and ego. Achilles' life and death are instructive lessons for all of us today."
-Tom Brokaw

"Spirited and provocative...a nobly bold even rousing venture...it would be hard to find a faster, livelier, more compact introduction to such a great range of recent Iliadic explorations."
-Steve Coates, The New York Times

"Penetrating...reflecting her own skills [Alexander] provides her own translation of an entire chapter...a real bonus for the reader, comparing favorably with Lattimore and Fagles."
-Boston Globe