How I Found the Strong (Hardcover) 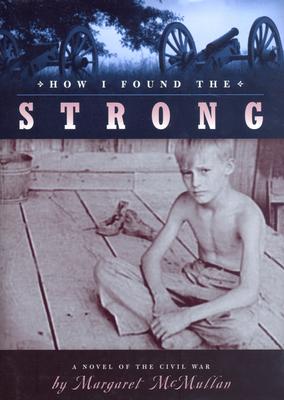 By Margaret McMullan
Email or call for price
Out of Print

It is the spring of 1861, and the serenity of Smith County, Mississippi, has been shattered by Abraham Lincoln’s declaration of war on the South. Young and old are taking up arms and marching off to war. But not ten-year-old Frank Russell. Although he is eager to enlist in the Confederate army, he is not allowed. He is too young, too skinny, too weak. After all, he’s just “Shanks,” the baby of the Russell family. War has a way of taking things away from a person, mercilessly. And this war takes from Frank a mighty sum. It’s nabbed his Pa and older brother. It’s stolen his grandfather, his grandmother. It has robbed Frank of a simpler way of life, food, his boyhood. And gone are his idealistic dreams of heroic battles and hard-fought victories. Now all that replaces those images are questions: Will I ever see my father and brother again? Why are we fighting this war? Are we fighting for the wrong reasons? Will things ever be the same around here?

Margaret McMullan is the acclaimed author of When I Crossed No-Bob and How I Found the Strong, as well as the adult novels In My Mother’s House and When Warhol Was Still Alive. Her work has appeared in such publications as Glamour, the Chicago Tribune, and Michigan Quarterly Review. She is a professor and the chair of the English department at the University of Evansville in Indiana.

"McMullen's first work for children is exquisitely written, its elegant prose fully up to portraying both the pastoral beauty of Mississippi and the horrors of war. The short, sometimes graphic story carries layers of meaning, evoking the complicated legacies of the South and the new world coming in the war's terrible wake...Unforgettable." Kirkus Reviews, Starred

"Shank's narration is crafted with such delicacy and precision..." The Bulletin of the Center for Children's Books