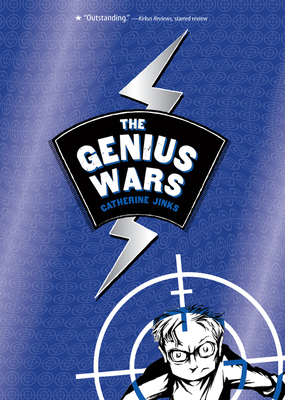 Boy-genius Cadel Piggot has a new name (Cadel Greenaius), a new family, and a new life. No more illegal hacking, no more false identities, and most of all, no more Prosper English. But when his best friend Sonja is attacked, it's up to him to figure out who was behind it. Before he knows it, Cadel is crossing oceans and continents, barrelling back into the depths of the criminal activity he thought he'd left behind, and coming face to face with Prosper English once again. Can Cadel track down Prosper before it's too late? And what rules will he have to break in the process?

Catherine Jinks grew up in Papua New Guinea and now resides in New South Wales, Australia. She is a three-time winner of the Children's Book Council of Australia Book of the Year award and has received the Centenary Medal for her contribution to Australian children's literature. Her popular works for young readers include the Evil Genius series, The Reformed Vampire Support Group, and the trilogy that began with How to Catch a Bogle.
Visit her website at www.catherinejinks.com.

"Cyber-espionage takes both front seats in this conclusion to the outstanding Genius series....the climax is taut, absorbing and tantalizingly ambiguous."  —Kirkus, starred review

"Full-throttled plot....will command the attention of even non-techie readers until Jinks's final plot twists wind to a close." —Horn Book