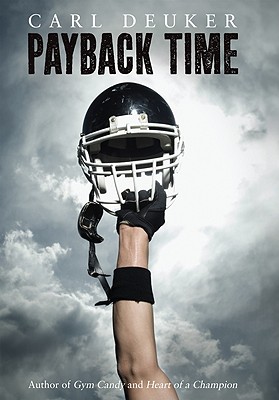 By Carl Deuker
Email or call for price
Out of Print

Through the eyes of a distinctly non-athletic protagonist—a fat high school journalist named Mitch—veteran sports novelist Deuker reveals the surprising truth behind a mysterious football player named Angel.  When Angel shows up Lincoln High, he seems to have no past—or at least not one he is willing to discuss.  Though Mitch gets a glimpse of Angel's incredible talent off the field, Angel rarely allows himself to shine on the field.  Is he an undercover cop, wonders Mitch?  Or an ineligible player?  In pursuit of a killer story, Mitch decides to find out just who this player is and what he's done.  In the end, the truth surprises everyone.

Carl Deuker is a celebrated author of "top-flight sports writing matched to uncommonly perceptive coming-of-age stories". He describes his younger self as a classic second-stringer: "I was too slow and too short for basketball; I was too small for football, a little too chicken to hang in there against the best fastballs. So, by my senior year the only sport I was still playing was golf." . He was a teacher for many years in the Seattle area, where he now lives with his wife

"The game action alone is riveting even for readers who don’t know a naked bootleg from a hook-and-ladder play, but Deuker enriches the tale with several welltuned subplots and a memorable narrator/protagonist who turns a corner on his own self-image while weathering brutal tests of his courage and determination. Definitely one for the top shelf."—Booklist, starred review

"Told in the first person, the story is initially funny, but the humor is soon eclipsed by the suspenseful plot and the copious play-by-play football action. These elements work together to create a rousing climax, which is then followed by a softer and more reflective denouement. Nicely played. "—Kirkus Reviews

"Deuker has crafted another entertaining and readable football story. The game descriptions are well done and will appeal to players and fans. Many teens who dreamed of being a star as children but don't make the team in high school will identify with Mitch." —School Library Journal

"A strong football story with nail-biting action and intrigue and a strong, appealing protagonist."—VOYA

"It's a solid Cooneyesque mystery/thriller, though, with enough straight-up gridiron action to draw a crowd, and it won't take much booktalking to sell middle-schoolers on this title."—The Bulletin

Gym Candy
An IRA 2009 Young Adult Choice
Texas Lone Star 2009 list
"Riveting" —The Bulletin
"An eye-opening recommendation to all budding athletes." —VOYA
"A superb sports novel with no easy resolutions."  —Kirkus Reviews
Runner
A Booklist Top Ten Sports Book
A VOYA  Top Shelf Fiction for Middle School Readers
Nominated as YA book of the Year in Texas
"Deuker fans won't be disappointed."—The Bulletin
"Suspenseful and involving. . . . Chance's dilemmas will quickly draw in readers and keep them turning the pages." —Kliatt
"Sinister goings-on, a murder, last minute heroism, and a new life rich with possibility make this a satisfying read." —Kirkus Reviews
High Heat
A Booksense 76 Pick
A Booklist Top 10 Youth Sports Book
Winner of the Golden Sower Award
"High Heat joins the Deuker canon with yet another fine study of a conflicted soul whose ethical salvation is determined in a sporting arena." —The Bulletin
"Good baseball books are in short supply for teens; do not let this one slip past." —VOYA
Night Hoops
An ALA Best Book
(star)  "An excellent novel." —School Library Journal
"Deuker adds further luster to his reputation for top-flight sports writing matched to uncommonly perceptive coming-of-age stories." —Kirkus Reviews
Heart of a Champion
YA book of the Year in Pennsylvania, Nebraska, and Tennessee.  Paperback edition available from Little, Brown.
Painting the Black
A Bulletin of the Center for Children's Books Blue Ribbon Winner
An ALA Best Book
(star)  "It ain't pretty, but it's real." —The Bulletin
"The well-written sports scenes will draw readers, but it is Ryan's moral courage that will linger when the reading is done." —Booklist