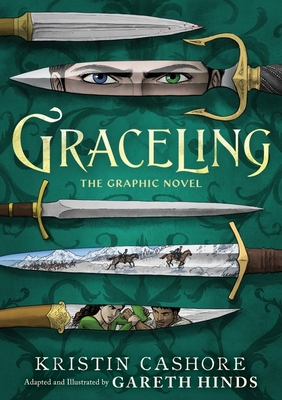 The beloved New York Times best-selling YA fantasy by Kristin Cashore is now available as a graphic novel, with stunning illustrations by award-winning artist Gareth Hinds.

Katsa is a Graceling, one of the rare people born with an extreme skill. As niece of the king, she lived a life of privilege until the day her ability to kill a man with her bare hands revealed itself during a royal banquet. Now she acts as her uncle’s enforcer, traveling the kingdom and threatening those who dare oppose him.

But everything changes when she meets Po, a foreign prince Graced with combat skills who is searching for the truth about his grandfather’s disappearance. When Katsa agrees to help him, she never expects to learn a new truth about her own Grace—or about a terrible secret that could destroy them all.

With "gorgeous storytelling" (School Library Journal, starred review) and characters "crafted with meticulous devotion" (Kirkus Reviews, starred review), Graceling is a beloved classic that has continued to resonate with readers for over a decade.

Gareth Hinds is the creator of critically-acclaimed graphic novels based on literary classics, including Beowulf, King Lear (which Booklist named one of the top 10 graphic novels for teens), The Merchant of Venice, The Odyssey (which garnered four starred reviews and a spot on ten “best of 2010” lists), Romeo and Juliet , and Macbeth. He is a recipient of the Boston Public Library’s “Literary Lights for Children” award. He lives in Maryland.
garethhinds.com
Twitter: @garethhinds
Instagram: @gareth.hinds

★ "This rich graphic novel adaptation should delight existing fans of the Graceling realm and attract many new ones. Highly recommended."—School Library Journal, STARRED review   "This gorgeous adaptation of Cashore’s bestselling novel maintains all of the action, suspense, and romance of the source material."—Booklist   "This is at its heart much more than just an adventure story: It is a story that looks at consent and power over others and a romance between two people dealing with the ways control over themselves affects the larger world—and their hearts as well.... An adaptation of a YA classic that is sure to draw in new fans."—Kirkus Reviews   "The action is terrific, the story is well-developed for readers unfamiliar with this world, and the ethical questions raised... are compelling and handled with nuance. The true heart of this version, however, are the illustrations themselves. Hinds trusts readers to find meaning in silences, sometimes pages long, and hover there, soaking in subtle gestures that tell the story as much as the fast-moving action scenes."—BCCB