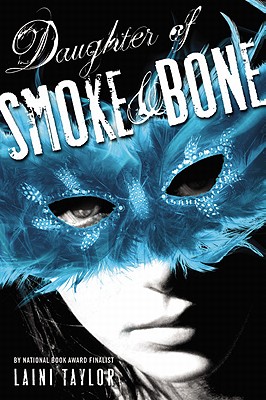 This is book number 1 in the Daughter of Smoke & Bone series.

Around the world, black handprints are appearing on doorways, scorched there by winged strangers who have crept through a slit in the sky.

In a dark and dusty shop, a devil's supply of human teeth grown dangerously low.

And in the tangled lanes of Prague, a young art student is about to be caught up in a brutal otherworldly war.

Meet Karou. She fills her sketchbooks with monsters that may or may not be real; she's prone to disappearing on mysterious "errands"; she speaks many languages--not all of them human; and her bright blue hair actually grows out of her head that color. Who is she? That is the question that haunts her, and she's about to find out.

When one of the strangers--beautiful, haunted Akiva--fixes his fire-colored eyes on her in an alley in Marrakesh, the result is blood and starlight, secrets unveiled, and a star-crossed love whose roots drink deep of a violent past. But will Karou live to regret learning the truth about herself?

* "National Book Award finalist Taylor (Lips Touch: Three Times) again weaves a masterful mix of reality and fantasy with cross-genre appeal. Exquisitely written and beautifully paced, the tale is set in ghostly, romantic Prague, where 17-year-old Karou is an art student--except when she is called "home" to do errands for the family of loving, albeit inhuman, creatures who raised her. Mysterious as Karou seems to her friends, her life is equally mysterious to her: How did she come to live with chimaera? Why does paternal Brimstone eternally require teeth--especially human ones? And why is she "plagued by the notion that she wasn't whole....a sensation akin to having forgotten something?" Taylor interlaces cleverly droll depictions of contemporary teenage life with equally believable portrayals of terrifying otherworldly beings. When black handprints begin appearing on doorways throughout the world, Karou is swept into the ancient deadly rivalry between devils and angels and gradually, painfully, acquires her longed-for self-knowledge. The book's final pages seemingly establish the triumph of true love--until a horrifying revelation sets the stage for a second book."—Publishers Weekly, starred review

* "[A]long with writing in such heightened language that even casual banter often comes off as wildly funny, the author crafts a fierce heroine with bright-blue hair, tattoos, martial skills, a growing attachment to a preternaturally hunky but not entirely sane warrior and, in episodes to come, an army of killer angels to confront. Rarely--perhaps not since the author's own Faeries of Dreamdark: Blackbringer (2007)--does a series kick off so deliciously."—Kirkus, starred review

* "Taylor crafts both her world and her romance with meticulous care, building the first on a wealth of thought-provoking details and making the second equal parts tender and antagonistic...Fans of torturously star-crossed lovers a la those in Marr's Wicked Lovely and Black's Tithe will find much to enjoy here, but those who flock to innovative, character-driven fantasy with thematic depth will be equally enthralled."—The Bulletin of the Center for Children's Books, starred review

"Author Taylor has created a variety of worlds, time frames, and creatures with such detail and craft that all are believable...Readers will look forward to the suggested sequel to this complex, exciting tale."—Booklist

"Wow. I wish I had written this book."—Patrick Rothfuss, author of The Wise Man's Fear

* "Lush description of a gothic and ghostly Prague beckons readers from the first page and fulfills its promise, leading to a star-crossed romance that spans worlds and transcends death...[Leaves] the reader both satisfied and eagerly anticipating a forthcoming sequel."
—The Horn Book (starred review)

"Daughter of Smoke and Bone is that rare beast: a novel that takes the familiar and makes it appear startling and new. Taylor has embraced the mythology of angels and reworked it in an extraordinary form, so that by the end of this lyrical, haunting book, I wanted to believe in the existence of these violent, tormented beings. I can hardly wait for the next installment."—John Connolly, author of The Book of Lost Things

"Daughter of Smoke and Bone is a lush, sweeping, romantic marvel of a book. Taylor's writing is a revelation, masterfully blending an intricate fantasy world into our own, with an artist's flair for exquisite details. Funny, devastating, delightful, unforgettable. Pure storytelling perfection."—Kiersten White, author of the Paranormalcy series

* "The suspense builds inexorably, and the philosophical as well as physical battles will hold action-oriented readers. The unfolding of character, place, and plot is smoothly intricate, and the conclusion is a beckoning door to the next volume."—School Library Journal (starred review)

"An adventurous story of self-identity, "Daughter of Smoke and Bone" is written with high-stakes flair and a touch of humor...[It is] well-told and well-paced, raising intriguing questions about notions of identity, expectation, trust, betrayal and belonging."—The Los Angeles Times