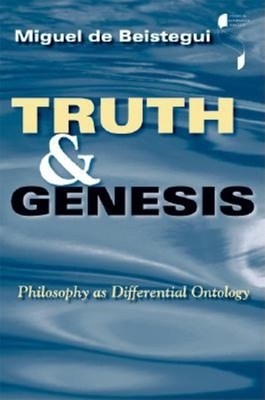 . . . an attempt to revive ontology (or metaphysics)--indeed philosophy itself--by means of a two-sided conception of being. . . . This is a remarkable idea which has produced a powerful book. --Leonard Lawlor

. . . a major philosophical study: rich, brilliant . . . a tour de force, a seminal study that will be a starting-point for future research in this area. --Robert Bernasconi

In Truth and Genesis, Miguel de Beistegui considers the role and meaning of philosophy today. Calling for a new departure for philosophy, one that brings together philosophy's scattered identities, de Beistegui proposes a robust and unified philosophy that would find itself equally at home in artistic and scientific disciplines. To build this renewed philosophy, de Beistegui turns to Aristotle and the earliest foundations of thought. He traces philosophy's development through the medieval and modern periods before comparing and investigating the work of two of the 20th century's most influential thinkers, Martin Heidegger and Gilles Deleuze. In particular, de Beistegui focuses on Deleuze's Difference and Repetition and Heidegger's Contributions to Philosophy for their handling of the concept of difference. De Beistegui concludes that Deleuze and Heidegger are irreconcilable, but it is in their disagreements that he sees a way to liberate philosophy from its current crisis.

Miguel de Beistegui teaches in the Department of Philosophy at the University of Warwick. He is the author of Heidegger and the Political and co-editor (with Simon Sparks) of Philosophy and Tragedy.