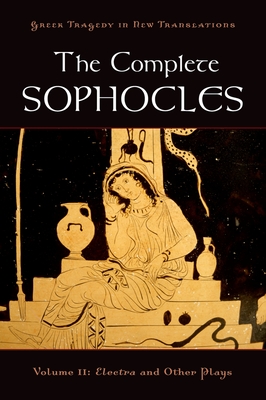 Based on the conviction that only translators who write poetry themselves can properly re-create the celebrated and timeless tragedies of Aeschylus, Sophocles, and Euripides, the Greek Tragedy in New Translations offers new translations that go beyond the literal meaning of the Greek in order to evoke the poetry of the originals. The volume brings together four major works by one of the greatest classical dramarists: Electra, translated by Anne Carson and Michael Shaw, a gripping story of revenge, manipulation, and the often tense conflict of the human spirit; Aias, translated by Herbert Golder and Richard Pevear, an account of the heroic suicide of the Trojan war hero better known as Ajax; Philoctetes, translated by Carl Phillips and Diskin Clay, a morally complex and penetrating play about the conflict between personal integrity and public duty; and The Women of Trachis, translated by C.K. Williams and Gregory W. Dickerson, an urgent tale of mutability in a universe of precipitous change. These four tragedies were originally available as single volumes. This new volume retains the informative introductions and explanatory notes of the original editions and adds a single combined glossary and Greek line numbers.

The Greek Tragedy in New Translation series is edited by Peter Burian and Alan Shapiro. Peter Burian is Professor of Classical & Comparative Literatures, and Theater Studies, Duke University. Alan Shapiro is Professor of English and Creative Writing, University of North Carolina, Chapel Hill. He is the winner of the prestigious Lila Wallace Reader's Digest award for 1992-1995. He is the author of several poetry collections, including Tantalus in Love, Song and Dance, and The Dead Alive and Busy.