The Book of Deadly Animals (Paperback) 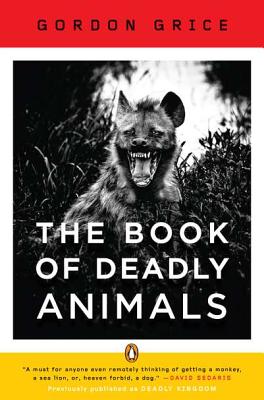 Whether at a zoo, on a camping trip, or under our bedsheets, we are surrounded by animals. While most are perfectly harmless, it's the magnificent exceptions that populate The Book of Deadly Animals. Award-winning writer Gordon Grice takes readers on a tour of the animal kingdom—from grizzly bears to great white sharks, big cats to crocodiles. Every page overflows with astonishing facts about Earth's great predators and unforgettable stories of their encounters with humans, all delivered in Grice's signature dark comic style. Illustrated with awe-inspiring photographs of beasts and bugs, this wondrous work will horrify, delight, and amaze.

Gordon Grice has written for The New Yorker, Harper's Magazine, Discover, and Granta. His first book, The Red Hourglass: Lives of the Predators, won a Whiting Writers' Award and was named one of the Best Books of the Year by the Los Angeles Times and the New York Public Library. He lives in Wisconsin.


“Did he say repugnatorial gland? What a wealth of information Gordon Grice is, and what a fine, beguiling writer. This book is a must for anyone even remotely thinking of getting a monkey, a sea lion, or, heaven forbid, a dog.” — David Sedaris


“When it comes to the most deadly animals on the planet it is best to be prepared! Forewarned is forearmed!” — Bear Grylls, host of Man vs. Wild


“I read with my dog in my lap and my heart in my throat. It’s a wonderful, slightly terrifying, utterly captivating encounter with the animal world—not quite like anything I’ve ever read before.” — Elizabeth Gilbert


“Gordon Grice writes about animals with a wit that relies on tone of voice, his ironically exact diction and an instinct for analogy … he has a scholar’s precision and a fourth-grader’s enthusiasm.” — Michael Sims, The Washington Post


“To weave the facts so artistically together as Mr. Grice has done takes considerable talent and a keenly felt interest.” — Meredith Greene, San Francisco Book Review


“Grice tempers his book with grim humor, a genuine enthusiasm for the subject, and fascinating trivia (Herman Melville’s Moby Dick was based on an actual whale named Mocha Dick that terrorized the South Pacific). A gifted writer, Grice’s relentlessly detailed descriptions of the effects of spider and snake bites, as well as the outcome of tangling with pencil catfish or alligators, may make this rough going for the easily squeamish, but those with a fascination for wildlife will find this an informative and dramatic study.” — Publishers Weekly


“Taps nicely into our enduring, awed fascination with nature’s predators and the popularity of TV shows such as The Crocodile Hunter. . . . Grice has been dubbed ‘the Stephen King of nature writers.'” — The Bookseller