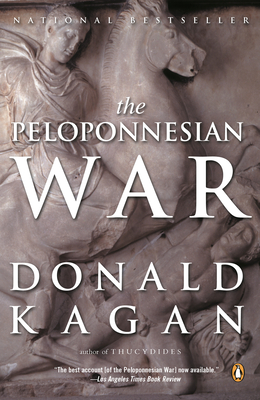 For three decades in the fifth century b.c. the ancient world was torn apart bya conflict that was as dramatic, divisive, and destructive as the world wars of the twentieth century: the Peloponnesian War. Donald Kagan, one of the world’s most respected classical, political, and military historians, here presents a new account of this vicious war of Greek against Greek, Athenian against Spartan. The Peloponnesian War is a magisterial work of history written for general readers, offering a fresh examination of a pivotal moment in Western civilization. With a lively, readable narrative that conveys a richly
detailed portrait of a vanished world while honoring its timeless relevance, The Peloponnesian War is a chronicle of the rise and fall of a great empire and of a dark time whose lessons still resonate today.

Donald Kagan is Sterling Professor of Classics and History at Yale University. His four-volume History of the Peloponnesian War is the leading scholarly work on the subject. He is also the author of many books on ancient and modern topics.

"Drawing on incomparable knowledge as a classicist, international relations theorist and military historian, Donald Kagan... has devoted a single volume to guiding us through that epic of miscalculation, hubris and strategic overreach, supplyingsupplemental observations and correctives to Thucydides’ classic History of the Peloponnesian War." —The Washington Post