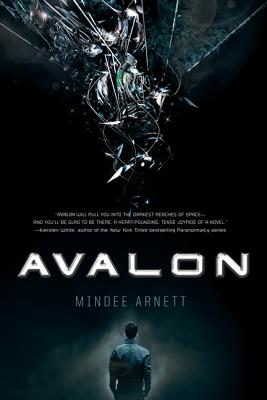 This is book number 1 in the Avalon series.

Jeth Seagrave and his crew have made their name stealing metatech: the devices that allow people to travel great distances faster than the speed of light. In a world where the agencies that patrol the outer edges of space are as corrupt as the crime bosses who control them, it's as much of a living as anyone can ask for. For years Jeth's managed to fly under the radar of the government that executed his parents for treason—but when he finds himself in possession of information that both the government and the crime bosses are willing to kill for, he's going to find there's no escaping his past anymore.

With pulse-pounding action, a captivating mystery, and even a bit of romance, Avalon is the perfect read for hard-core sci-fi fans and non-sci-fi fans alike.

Mindee Arnett is the acclaimed author of Onyx & Ivory and its sequel, Shadow & Flame, as well as Avalon and its sequel, Polaris. She lives on a horse farm in Ohio with her husband, two kids, a couple of dogs, and an inappropriate number of cats. You can find her online at www.mindeearnett.com.

“Avalon will pull you into the darkest reaches of space-and you’ll be glad to be there. A heart-pounding, tense joyride of a novel.”
— Kiersten White, author of the New York Times-bestselling Paranormalcy series

“This is an exciting piece of science fiction that keeps up its energy from beginning to end … it is sure to be one of the most popular releases in the genre this year.”
— School Library Journal (starred review)

“Arnett’s fast-paced space western combines S. E. Hinton’s The Outsiders (1967) with television’s Firefly in what appears to be the beginning of a promising series. Sci-fi fans will gulp it down in one sitting and ask for more.”
— ALA Booklist

“Secrets, betrayal, family, team work, and love are all at the heart of Arnett’s book. It is a plot-filled story with twists and turns that will keep readers guessing about what will come next.”
— Voice of Youth Advocates (VOYA)