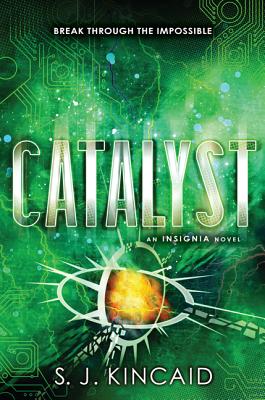 By S. J. Kincaid
Email or call for price
Hard to Find

This is book number 3 in the Insignia series.

S. J. Kincaid has created a fascinating dystopian world for Insignia, her futuristic science-fiction adventure series perfect for fans of Ender's Game. Earth is in the middle of WWIII, battling to determine which governments and corporations will control the resources of the solar system.

Teen Tom Raines grew up with nothing, some days without even a roof over his head. Then his exceptional gaming skills earned him a spot in the Intrasolar Forces, the country's elite military training program, and his life completely changed. Now, in Catalyst, the explosive series conclusion, dangerous changes have come to the Pentagonal Spire, where Tom and his friends train. When a mysterious figure starts fighting against the evil corporations' horrifying plans, but with methods Tom finds shocking, he must decide which side he's on.

With slim odds of success, is it even worth the fight?

Kincaid’s Insignia series has proven science fiction worthy of comparison with Asimov. Readers will be spellbound as they inhale this last chapter.
— Booklist (starred review)

Kincaid’s trademark spectacular action sequences and affectionate banter make room for Tom’s coming-of-age without compromising what readers have come to love. An unabashedly optimistic denouement is the perfect ending for this series that’s unafraid to ask readers to grapple with big ideas.
— Kirkus Reviews (starred review)